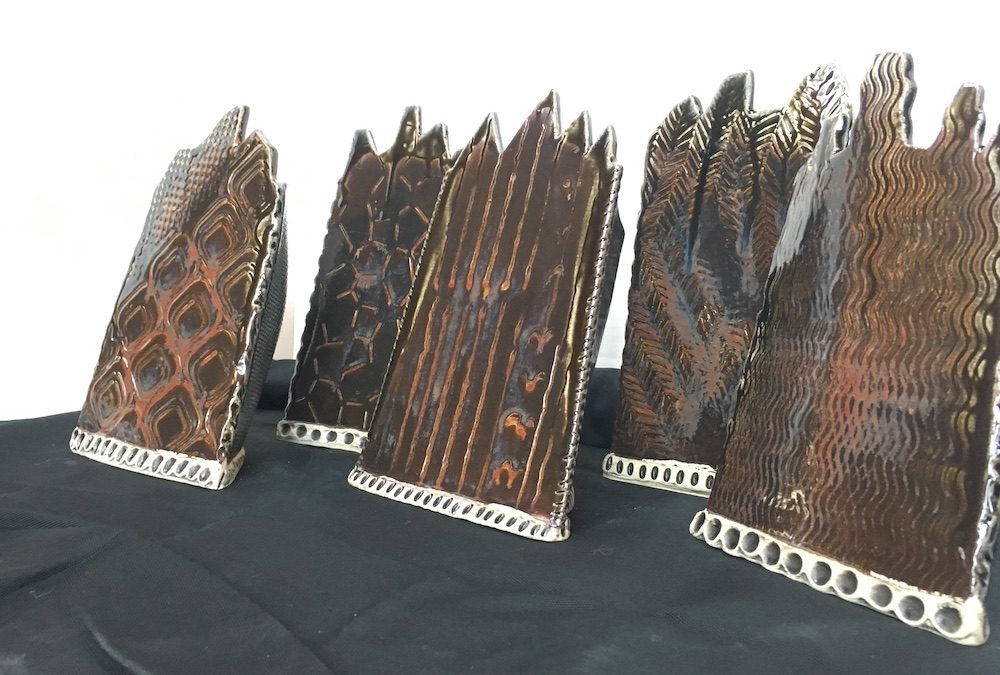 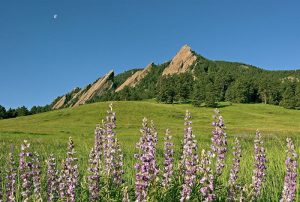 Flatirons Vases, and a view of the Boulder, CO Flatirons. Below is my artist’s statement for my show “Tectonic Plates and Topographic Tiles”.

I made my first Tectonic Plate after experiencing a 7.8 magnitude earthquake in Ecuador in 2016. At  9200’, and 110 miles from the sea-level epicenter, we still felt the shaking, so pronounced and disorienting, for nearly a minute.  Everyone jumped into emergency mode, with people rushing to get out of buildings, so that if they collapsed they wouldn’t be trapped inside. The people there knew what to do when an earthquake strikes; they live along the Ring of Fire, the seismically-active areas surrounding the Pacific Ocean.

That first Plate (after Quito) was a continuation of the hand-built forms I’d been making since I returned to clay in 2015. After my career in apparel design and manufacturing, I dusted off my B.F.A. in ceramics and began creating sculptural, functional pieces using fabrics for textures and apparel construction techniques for shapes and details. “After Quito” was more expressive and free-form than the pieces I’d been making, and it marked the beginning of a body of work that I continue to explore.

“Tectonic Plate” started as a play on words, but geology became an area of study and then inspiration for me. I began to learn about plate tectonics and seismic forces, how rocks are formed and mountains created. Two years after Ecuador, we travelled to Iceland, where I marvelled at the volcanos, geysers, and hot springs and walked in the rift between two tectonic plates. Through Google, I’ve tried to wrap my head around the formation of the Rockies and the creation of the Great Rift Valley in Africa. We visited Boulder, CO, and I took inspiration from the Flatirons, the dramatic rock outcroppings that overlook the city and were created around 50 million years ago. Thinking about processes that unfold over millions of years has provided a needed perspective in these times of immediacy, turmoil, and distress!

Basically, rocks + glaciers + water = clay. The minerals used in ceramics for glazes and clay bodies are the result of geologic processes, and erosion. Potters employ the metamorphic force of heat to turn clay back to stone(ware). Any faults are exposed in the process – as in the cracked tile, where damage only appeared after the glaze firing to 2232℉. (It reminds me of pictures I’ve seen of the San Andreas fault running through the highway.)  This demanding process of making clay vessels, and the alchemy of firing, is a big part of what draws me to ceramics. As I seek to eliminate Faults as I transform Earth into useful Art, I know I am working with forces beyond my total control. Every kiln opening is a magical surprise.

***As I worked on these pieces over the winter, I read the Broken Earth trilogy by N.K.Jemisin. She imagines a far-future, highly seismically-active and transformed Earth, with a culture organized around surviving global apocalypse. Certain humans, called orogenes, can control seismic forces but are enslaved and exploited for this ability. Reading about a geology of the future instead of the geology of past ages was inspiring, especially since humans still survive.